We just recently took our first trip in our Nosara 55’ and it was amazing! We love the tent and also loved our experience with this company! We had some trouble with setting up the tent and whenever we called we got great customer service within minutes! Very happy with this purchase and this company! Easy to install. Looks tuff. Can’t wait to put my rtt on. Awesome experience, great customer service, would order from them again. Rack is great and customer service was very responsive. Thank you!

I got to said this roof rack is very impressive build to last and material exceptional. Very impressed with the design. Installation is awesome very easy to put together. Great delivery service . Thank you for your great service. Great rack with a quick and easy install. Product was securely packaged and arrived with no flaws. Free shipping was great! Product took 7 business days to ship, and arrived at my door 2 days later. Would recommend this product and will definitely use this vendor again in the future!

Awesome product, fit and shipped out on time! nice, compact and lightweight. this is a perfect solution for a 1 or 2 night trip. I use this with my dometic electric cooler and i'm set! quality is decent for what it is...

Awesome AIOKS and awesome seller. Arrived sooner than expected and in great condition.

Because of the popularity of roof-top tents as a way of enabling vacations during the pandemic, when I tried to purchase an Autana 3 in early Sept. from various places online (including directly from Thule/Tepui), I found they were sold out everywhere. This was a big disappointment, as I'd planned on camping with the tent in early October. When I contacted Thule, they said that they were expecting some new stock to arrive soon, but that they weren't taking back-orders from individuals. Their advice was to find a retail outlet that could try to snag one of the limited number of tents via backorder. Because Off Road Tents clearly prides itself in its customer service, I decided to go with them, which turned out to be a great decision. Not only did Ignacio (Off Road Tents customer service) check in with Thule often to make sure that I'd get a tent, he kept me informed on what he learned, and relayed the good news that he had managed to get one of the new tents arriving at Thule reserved for me. He also made sure that the tent was sent to me as quickly as possible (and it arrived in time for my October trip - see photo and video!) and let me know as soon as Thule had shipped it. When I had a concern about whether the OEM crossbars on my LR3 could support the tent, I was impressed that instead of using this as an opportunity to sell me an expensive new roof rack, he gave me the honest response that my current setup would be fine. The ladder that came with the tent had an issue with one of the rungs not being securely attached, which I let Ignacio and Thule/Tepui know about right away. Thule made it right by sending a replacement right away, but again Ignacio impressed by following up with me to make sure that Thule had done their job...it was comforting knowing that Off Road Tents had my back.

The tent itself is amazing - it's well constructed, roomy, and thoughtfully designed. It's easy to get a good night's sleep in (being in my mid 50's, that's getting harder to do when camping than when I was young). It's much more airtight than a standard tent, so it stays a lot warmer and the dense canvas blocks out the early morning sun. I also appreciated the little touches such as convenient ways to secure the mosquito netting windows when they were rolled up, as well as the intuitive way that the tent gets folded up and secured for storage. The mattress seemed a bit firm for my taste and since I already had an Exped Megamat Duo, I used that in addition to the mattress that came with the tent, and found that combination was quite comfortable (I didn't try sleeping on just the tent's mattress). Installation was straightforward and the first setup went smoothly, though it was helpful to have watched some of the instructional videos by Thule/Tepui beforehand.

Looking forward to many more nights in this tent and highly recommend purchasing through Off Road Tents!

The tent is great- This tent was actually a substitute to our original order that was delayed due to COVID. Other than a few more spent $, we actually believe this was the better option in the end anyway. It was easy to attach to our rack system. Super easy to set up on-site quickly. The bed is super roomy and sleeps 2 humans and 2 dogs comfortably but the mattress is slightly longer than a queen so your regular sheets won't fit. The skylight windows are a great addition, especially with a clear night sky. The annex is a great addition and everything is made out of high-quality material. Highly recommend-cant wait to use again I went deep into Canyonlands this last weekend and the rack/accessories held up to pretty extreme abuse (4 tires in the air @ 70mph training for Baja 1000). I have yet to put a roof top tent on it which will be the final test, but I'm sure it will be fine. Warning: I did not think I needed to lock the latches of the tote Gear Pod while camping. I considered them for anti-theft only. The violent shaking of off-roading did manage to open the latches and I lost some equipment. I don't blame the design, but I did want to warn new owners. I will like to give 5 starts to customer service. Ignacio was on top of everything. He always kept communication with us about the updates of the order. We are in love with our roof tent. Thanks for your excellent service.

product inventory and communication from their customer care team is amazing! Keep up the good work. Fast response and customer service takes the time to get you what you need. The brackets for the SlimLine II were bent. The box the were packed in was not damaged in any way. I thought it was designed that way, till trying to mount it on the car. They were both wrapped together and seemed like it was the design. I was able to bend them back with little trouble, but fear it is weaker now. The instalation instructions are lacking to say the least, but understand thats on Front Runner. If the bend is for shipping purposes, then it should state that while also stating it does not weaken it in any way. I am also, unsure if I got the right mounting brakets. Instructions show a rack for a car with a sun roof, I do not have a sunroof. No way to determine of it is one and the same. Shipping was fast, but product support needs improvement. Most of that appears to be on Front Runner though.

This tent is amazing. The Flite Plus 3.0 is the best Tentsile has to offer to those backpackers who want to experience Camping in the trees. Great weight, taking in account all the gear you need for it, spacious, enough to keep an adventurous couple comfy with all their goods save and sooo badass and cool to be in.

Looking back to the prior models of this tent, this one sure has pockets and tons of places where to put your gear and not having it jump around every time you climb in. Would recommend! 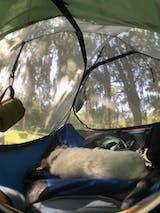 The staff was very helpful and knowledgeable of there products. I’m very pleased with my Leitner Rack!